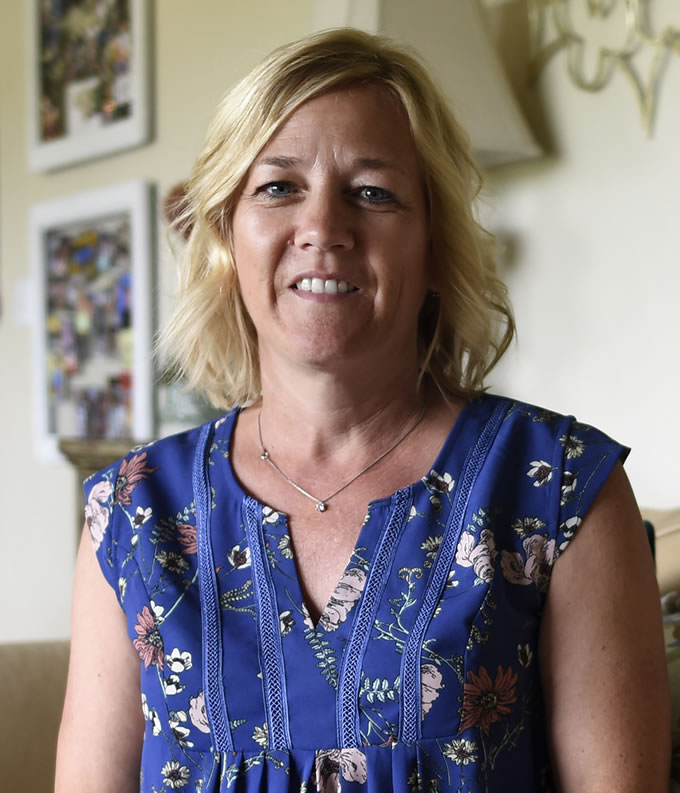 The Foundation for the Benefit of Helias Catholic High School is proud to feature Susie Luetkemeyer Theroff in our monthly Alumni Spotlight. Susie graduated from Helias in 1985 and currently serves as the Foundation’s Annual Fund Drive chairperson. She is married to Jefferson Bank President and CEO Ken Theroff (JCHS, ’84). The Theroffs have three daughters, Emmi (20), Anna (18), and Grace (16). All three daughters attended Helias with Emmi and Anna already having graduated and Grace currently enrolled as a rising sophomore.

Susie credits Helias for helping her get an early jump on her professional career as a graphic designer by fostering her interest in art, as well as giving her the opportunity to shadow the in-house designer at the Missouri Highway Patrol as part of her studies. That shadowing helped her earn an internship within the same office while attending University of Missouri – Columbia as a graphics design student. After graduating college with a fine arts degree, Susie was able to obtain the MHP graphics designer position when her long time mentor gave up the job to move to Texas.

After spending ten years with the Missouri State Police, Susie and her husband welcomed daughter Emmi to the family. Susie then left her job to become a stay-at-home mom, although she did continue to do a variety of freelance design jobs on the side, including various paintings, murals, furniture painting, jewelry, etc., as well as artwork used for the Jefferson Bank Christmas card for each of the past six years.

Since leaving the office life, Susie and Ken have added two more daughters to the home, and have also added “rental property manager” to their resumes. Presently the pair own three properties that they oversee.
In addition to her work, Susie also finds time to give back to her community in various capacities. One of the programs she’s actively involved with is Capital Arts. Over the past three years she’s participated in the CelebARTy dinner and live art auction fundraiser, during which local celebrities get paired with artists to create original works of art for the bidding public to take home.

Susie gives freely of herself to the Helias community as well, including serving as the Helias Foundation Annual Fund Drive co-chair last year and the chairperson for the 2018 campaign. She says that she hopes her daughters see through her efforts the importance of giving back.

“I want them to understand that they should give back and keep the legacy going,” Theroff said. “I didn’t realize when I was in school that my tuition was kept low because other generous people were donating to the school. Now I’m doing that for students today. Hopefully they’ll do the same for the next generation of Helias students.”

“When I was a student my mom volunteered with the parents club and ran the concession stands,” she continued. “I want my kids to see that I’ve given back to Helias and to feel that no matter where they may go in life, they can and should give back to the school that has given them and this family so much.”

Two things Susie says Helias gave both her and her daughters was a good moral background and the confidence to stay true to their beliefs, two things immeasurably important when it comes to young adults going off to college.

“When I saw things that went on in college, my experiences at Helias helped me stay true to myself, know what was right and wrong, and what situations to avoid,” Susie said. “They helped me to understand that I didn’t have to do things I didn’t agree with just for the sake of belonging to a particular group. I didn’t have to compromise myself or my values just to fit in.”

Susie went on to say how well Helias prepared her and her daughters academically for the transition to college life.

“I learned good study habits at Helias; I learned how to study and manage my time and workload,” Theroff said. “And I feel like that helped me to not struggle in college.”

When asked if she felt the same way as her mother, Emmi, the oldest of the Theroff daughters nodded and smiled in agreement.


To nominate someone for the Alumni Spotlight, email info@heliasfoundation.org.