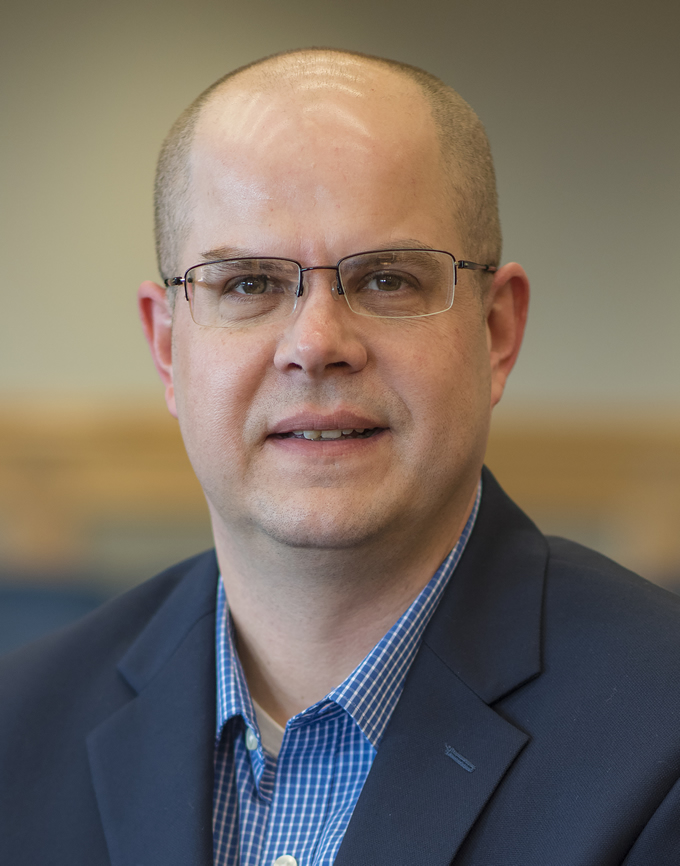 This month's Alumni Spotlight features our very own Foundation board president Eric Bernskoetter. Eric graduated from Helias in 1992. He and his wife Kerri have been married for nearly 21 years. Together they have four children: twin daughters Riley and Reagan Bernskoetter, both seniors at Helias, and stepson Brett Skinner. Sadly they also had an infant child who passed away at two-months-old several years ago.

Eric and his family are members of St. Francis Xavier parish in Taos.

For more than 19 years Eric has worked for the Missouri Department of Transportation. Currently he serves as the Motor Carrier Services Program Manager. In his day to day work, his office oversees regulations for international fuel tax and registrations for commercial vehicles, issues oversize/overweight permits and determines proper and safe routes for oversize/overweight loads. The revenue generated through Eric's office is responsible for a portion of the funds that go toward repairing roads and highways throughout the state.

Eric credits his time at Helias for helping instill in him the type of work ethic that has helped him succeed first in the classroom and now in his career.

"Even in the early days when I was just a student going out to look for my first jobs I got the sense that a lot of people in the community viewed Helias kids with respect which helped us with job opportunities early on, and in turn helped me develop a solid work ethic. That work ethic carried over and also helped me in school."

"The academics when I was a student were strong enough to make college seem not so difficult. We were well prepared and well taught, and most importantly we all knew how to properly take notes, which I think is a major stumbling block for a lot of kids today."
"Ultimately Helias taught me to not shy away from hard work, and that's helped me succeed in school, work and life."

Despite crediting Helias with so much, Eric the Helias alum wasn't always Eric the Helias dad. When he married his wife Kerri, the time eventually came to choose a school for her son and his now stepson Brett.

"My wife went to public schools so she had a little different perspective than I did. I was skeptical at first because I had heard some negatives about class sizes and such. Fortunately we didn't experience any of that during his time at Jefferson City High School. His experiences at JC were very positive and he received a great education. I think a lot of that boils down to parent involvement there also."

Eric said during Brett's time at Jefferson City he and Kerri very involved as parents. From booster clubs and various other organizations to parent-teacher conferences, the two stayed actively involved in their child's academic and athletic progress.
To Bernskoetter, that parent involvement is what supports and encourages Helias and the parochial schools.

"The biggest difference we've seen is that the parochial schools, from the parish schools to Helias, they're all basically run through parent involvement."

Bernskoetter feels like that involvement partially stems from necessity.

"Even though public and private schools face similar hurdles and deal with many similar situations, so often at the parochial schools it falls upon the parents' shoulders to help the school accomplish so much with fewer resources. Fortunately Helias is blessed with a fantastic network of parents and community members and alumni who are willing and able to jump right in and help in any way the school needs. That kind of eager willingness and sense of service shared in the Helias community benefits everyone, and it trickles own to the kids."

It's not lost on Bernskoetter the impact of his own involvement with the school and the Foundation as it relates to being a Helias parent. He says that while he was a student at Helias, he knew there was a Foundation but didn't really understand what they did or what their role was. He's hoping that his twin daughters Riley and Reagan, who having seen his efforts, can take with them a better understanding of the work the Foundation does.

"We've had that conversation at home because when I took on the role, they had questions about what was even involved. I hope they see what the Foundation does for the school and what their mission is. I hope that they see that there are parents who willingly invest their time and money for nothing more than the betterment of their school, and that that inspires them long after they've graduated."

"My kids have been constantly amazed at how much I've been involved and how many programs I've served, and I really hope they learn from that and understand the importance of giving back."

** If you know of any Helias alum who's proud to say they're a #CrusaderforLife, please send their name and contact information to kwilson@heliasfoundation.org.
Each month we'll focus on a new and different member of the Helias family. Whether they passed through these halls 60 years ago or their cap and gown still have that new smell, we want to know all about where life has taken our Crusaders and how their time at Helias helped them along the way!


To nominate someone for the Alumni Spotlight, email info@heliasfoundation.org.